First references to Rulewo village, where the Hanza Palace is situated, may be found in documents dating back to 1295. At that time, this small settlement of the Kociewie Region was owned by the Świecie Commandry of the Teutonic Order, however, further centuries witnessed its being passed from one hands to others and belonging either to Poland or Germany.

It was owned, among others, by the representatives of famous Polish families, such as Konarski or Dorpowski families.

At the turn of the 19th century, in the place where the palace is located, there was a mansion house owned by the family of Pawłowski, which burnt to the ground after fire. In 1829, the estate was purchased by Gustaw Theodor Maecker, who soon started erecting the existing brick classicist palace on the foundations of the ruined mansion.

The new owner continued works in the landscape park surrounding the palace, which was predominantly romantic in its type and established by the Pawłowski family at the beginning of the 19th century. To this day, the park is home to numerous specimen of old trees, including Argentinian platanus, European beech, Canadian hemlock, black locust and European oak, as well as ashes, elms and maples. The historical disruptions were survived also by three ponds linked by channels, over which stylish bridges were built, the coral cave and a hill being the viewing point.

Not only the palace and park complex, but the entire Rulewo village owes its development to the Maeckers. The son of Gustaw, Hans Nathanel, established a sawmill, smithy, distillery, and even a power house, near the palace, and the majority of those facilities survived to these days. His great management and active participation in the social and political life were acknowledged by the noble title he received. A heraldic cartouche of the Maeckers is still on the tympanum of the front wall of the palace. 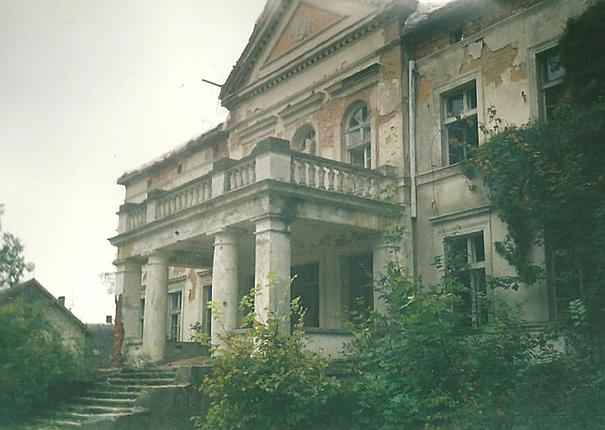 The last private owner of Rulewo estate, before its nationalisation after the WW2 by the authorities of the People's Republic of Poland, was Rudolf Julius Emil von Maecker, who left his property in 1945. The palace, which remained intact during the war, was handed over to be administered by the State Agricultural Farm, as many similar buildings. After the transformation of 1989, in 1994, the Agricultural Property Agency of the State Treasury sold the palace taken over from the State Agricultural Farm to a private individual who undertook to carry out restoration of the neglected building by beginning with removing the roof and internal plaster. Unfortunately, that renovation was limited to such activities and for many years the condition of the palace has been deteriorating.

Fortunately, at the end of the 20th century, the palace, already entered into the register of historic monuments, was acquired by the current owner, who decided to carry out costly major renovation work in order to restore it to its previous glory. The restoration plan envisaged that the building would be transformed into a hotel, but the original shape would be preserved to the extent possible. Thanks to this, on 1 August 2011, the four-start Hanza Palace hotel started its activity, and only 3 years later, thanks to its extension, it gained its current shape of a luxurious hotel with a wellness&spa zone and rich event/conference venue facilities.

Do you want to get a DISCOUNT or receive the latest information on services and promotions in our hotel? Sign up for the newsletter.